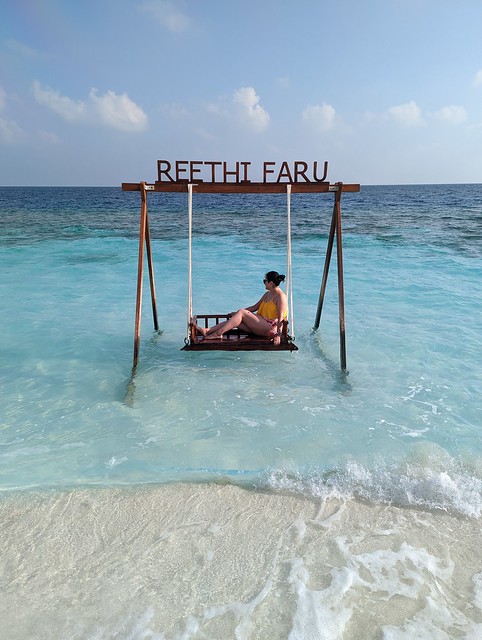 We recently stayed at the Reethi Faru resort in Maldives for our honeymoon, and I got a lot of questions from people about my experience, so I wanted to share some thoughts about this resort. In addition to my review, I’ll also cover what I paid for this resort, and travel and logistics.

As with most people, Maldives was a major bucket destination for me. I’ve been wanting to come here for my honeymoon for as long as I can remember, and I am very lucky that my amazing husband was happy to allow this dream to come true for me. Pre-COVID had initially booked a different resort, but when the pandemic happened, we had to cancel the other resort. A few weeks into the pandemic, this deal came up (see Pricing info below) and we had to buy it. We’re really happy we did get the deal, because we got to go to a traditionally very expensive destination for a fantastic price.

We stayed in an overwater villa, which was part of the deal we got. I had heard that beach villas are actually preferable for those who come to the Maldives often, but since it was our first time, we had to stay in an overwater villa. It was everything I had imagined, and even more. It’s really hard to describe just how beautiful Maldives is. The water is crystal clear and completely transparent, you can see to the bottom and all the fish swimming around even while standing on land. There’s so much fish and wildlife, and it just feels surreal to be in the middle of the Indian ocean swimming on a sandbank with nothing around you. 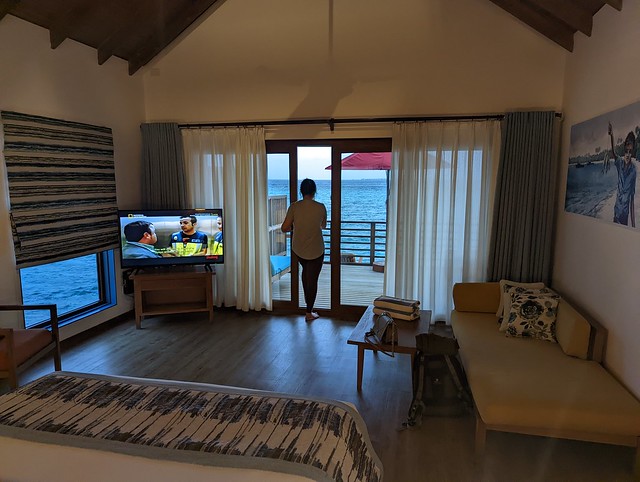 Thoughts about my stay

Overall we had an enjoyable time. The service we got from a few of the restaurant servers definitely made up for the lack of other things. 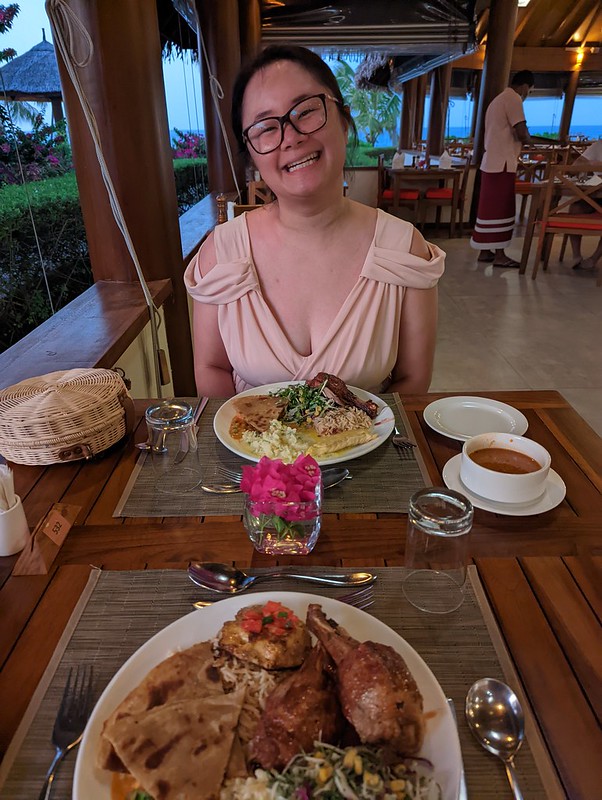 We flew Singapore Air from Vancouver to Singapore, stayed overnight at Changi Airport at the Ambassador Hotel in T3, and then flew to Male the next morning. After we arrived at Male, you had two options for your transit to the resort – you could either take a seaplane, which would be more direct as you’d fly straight from Male airport to the resort; or you could take a domestic flight to a smaller airport and then take a speedboat to the resort. We did the latter, as our one way transit was covered in our package (more info about that later).

The total trip end to end was 44 hours long, which was way too long.

The flight from Vancouver to Singapore was actually a lot more pleasant than I expected, even though it was nearly a 17 hour flight. The food was great on board (I miss airplane food so much), and I especially loved the selection of instant noodles available. There was also a good selection of movies, which I took full advantage of. Being a flight to Asia, everyone was super diligent about mask wearing, and there were no issues at all with anyone not wearing a mask.

The stay overnight at the Ambassador Hotel was also pretty decent. I was happy to be able to shower and change into fresh clothes, and sleep in a real bed, before our next leg of the trip. The hotel was pricey at around $350 for just a 10 hour stay, but we got two meals included as part of our stay, and honestly it made the trip so much more palatable. I highly recommend booking an airport hotel if you have an overnight transit because it can help make the rest of your trip less exhausting.

The flight from Singapore to Male was short, at under 4 hours. The plane was older so there was no in-flight entertainment, but I had downloaded some Netflix shows on my computer so I was able to watch those. Again the food was great, and I took advantage of another Singapore Air flight to eat their instant noodles.

The last part of the trip was a speedboat ride. The speedboat ride was supposed to be 40 minutes but it ended up being over an hour because we did not go straight to our resort, rather the boat dropped off other passengers at other resorts and ours was the last one. I heard from other people that depending on how many resorts they go to, it can take over 1.5 hours, so just keep that in mind if you choose this option. The domestic flight + speedboat connection is cheaper than taking the seaplane. A seaplane ride round trip is around US$500 per person, but the domestic flight + speedboat connection is just US$350 per person, round trip. We only paid US$175 per person for our domestic connection because the rest was covered in our package.

We arrived at Male airport at around noon, but we didn’t get to the hotel until 6PM that day because of the waiting in between connections. Reethi Faru is on “island time,” which is one hour ahead of Male, so by the time we got here, it was already sunset and dinnertime, so the first day was really a wash. 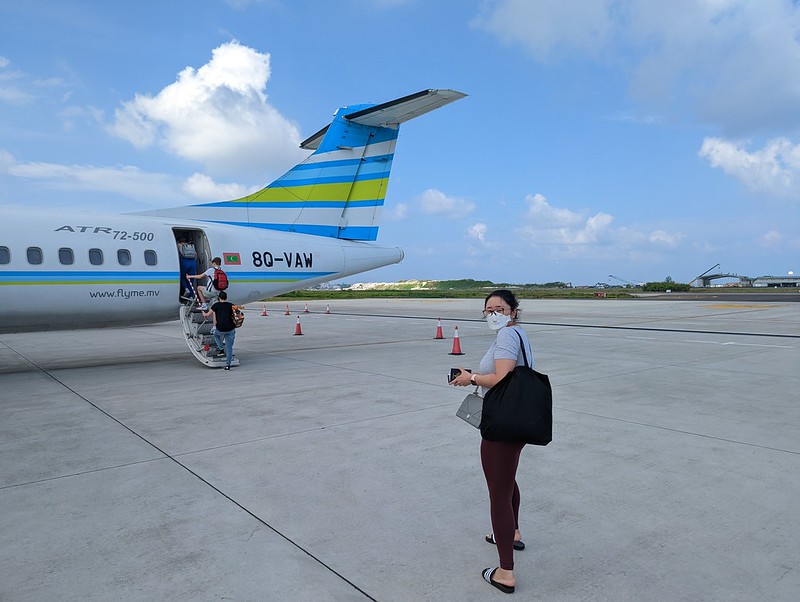 We got an amazing good deal on our stay, which included:

We paid US$1,600 for the package (approximately C$2,400 at the time after conversion) via Travelzoo, which is a phenomenal deal for the Maldives, especially since there was no limit on the dates to travel (you just have to use it before the end of 2022), so we came during the peak of their high season in February.

If you don’t follow Travelzoo, you gotta because they have so many amazing deals for travel to fancy resorts. I’ve been a subscriber for years and I’ve encountered several really good deals, but this one is probably the best. We had been looking to come to the Maldives for our honeymoon even pre-COVID, and the resort we had originally booked (and canceled) was over double the price of this resort, for less nights, less meals included, and no transit included. The star rating and reviews were similar, with Reethi Faru edging out the other resort by a little bit.

In addition to the above price we paid for the package, we spent another C$1,200 on food and drinks, and $500 on activities, such as a dolphin safari (SO worth it), two massages for me (the first one was significantly discounted), and renting some equipment for activities in the water.

I got asked a lot if I recommended Maldives, and honestly I don’t. The distance is the #1 reason why I wouldn’t recommend it for someone living in North America. I think that we’re really lucky to be relative close to a few very beautiful destinations, for example all of the Caribbean is just marginally less beautiful than Maldives and it’s only a 5 direct hour flight for us in Vancouver. I think that if it is a bucket list destination for you then 100% you should do it once to experience it, and then you can go back to travelling to closer locations where you don’t spend 2 precious vacation days in transit.

I did have a good time, and I’m really glad I went because it was a dream destination for me. It was also wonderful to experience it with my husband. 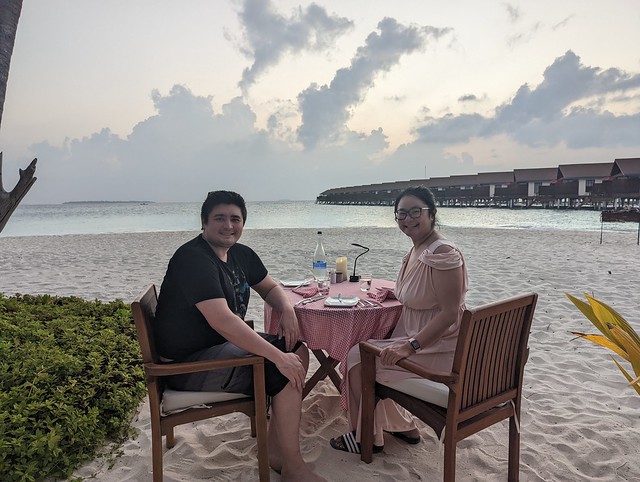 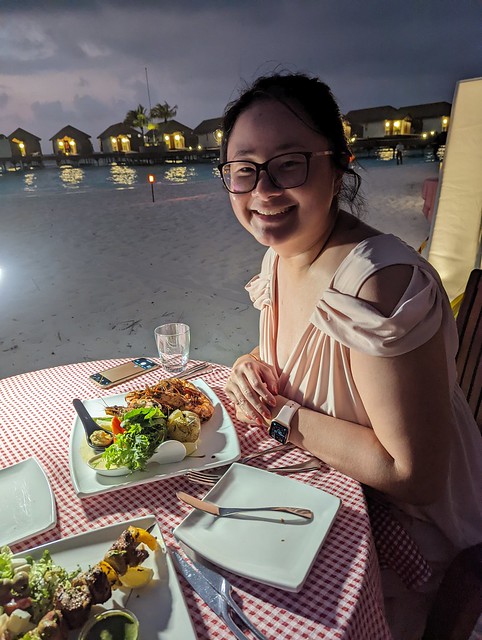 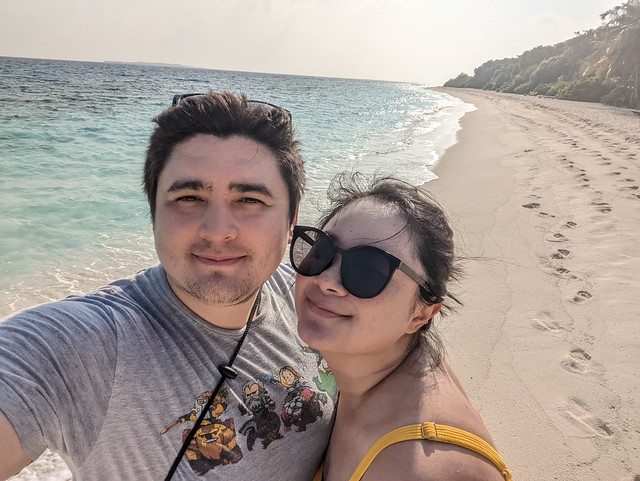 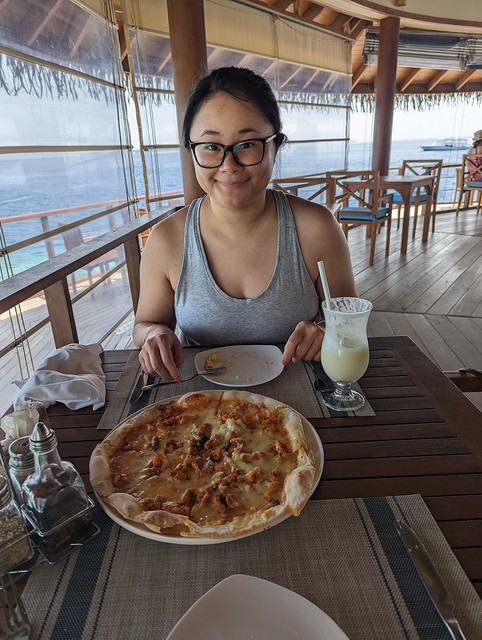 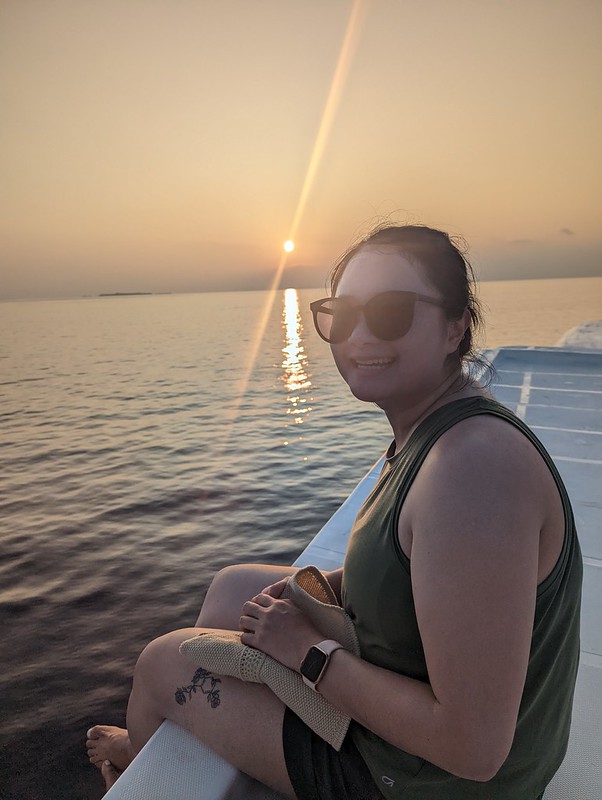 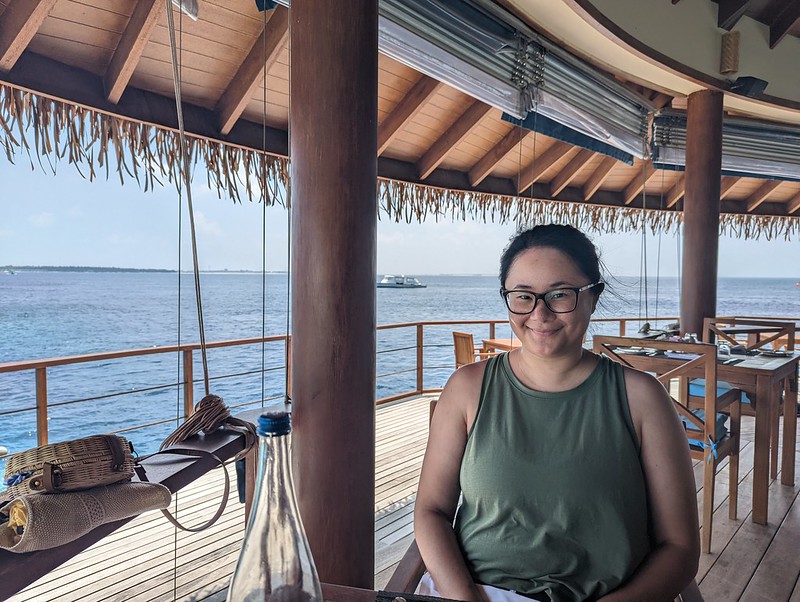 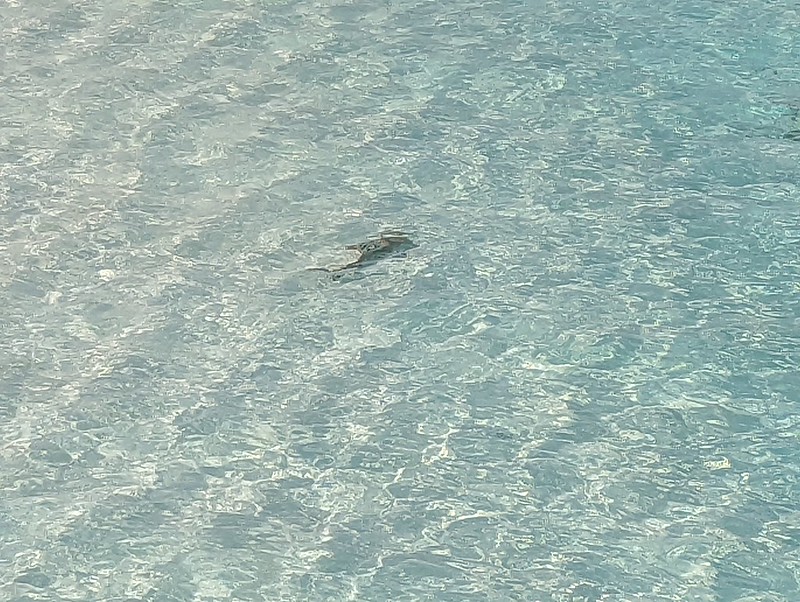 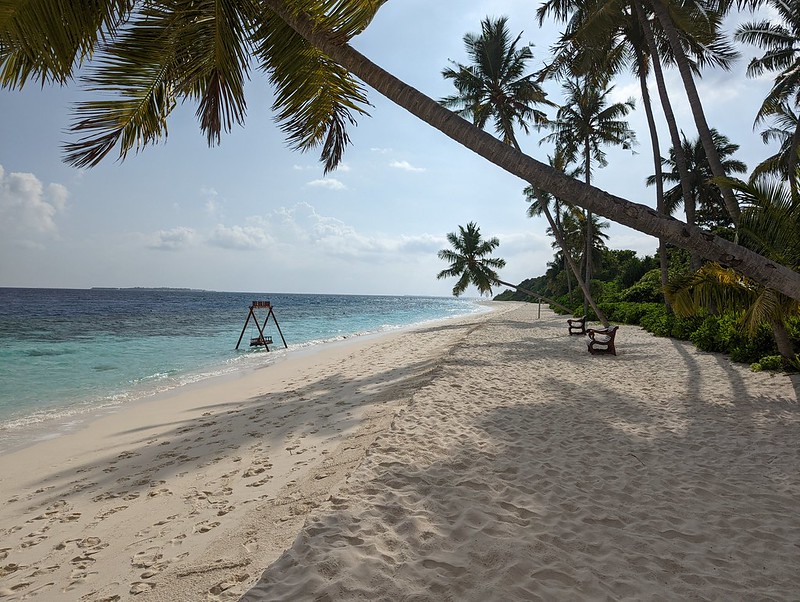 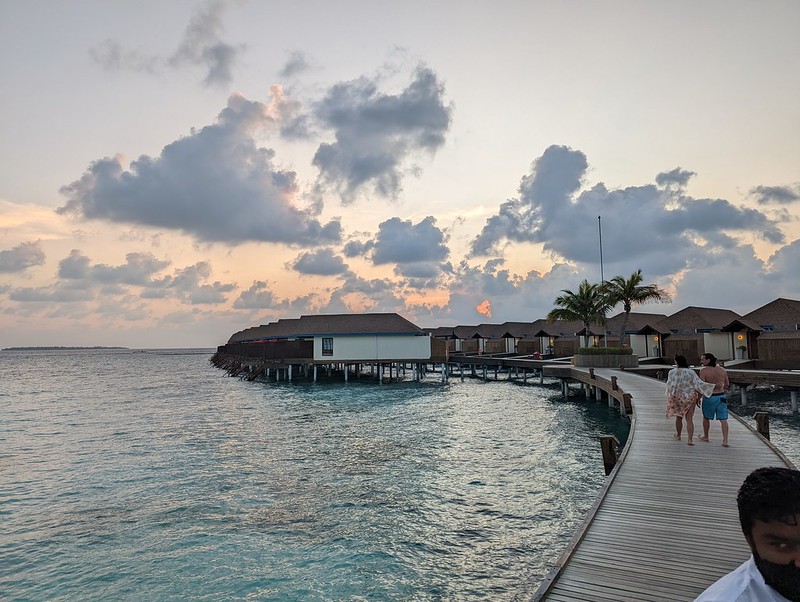 Sheila is a Vancouver, Canada-based beauty, lifestyle, and fashion blogger, since 2008. See here to learn more about Sheila and her blog, Maddy Loves.

Questions/comments? Sponsorships/invitations? Contact me at maddylovesblog@gmail.com. Look forward to hearing from you!

All of the products featured on Maddy Loves are products that I have tried for myself over a period of time. They may be working for me, but may not work for you. Please exercise discretion when making your purchasing decisions. Maddy Loves will not be held liable for any problems or concerns that arise.

Unless otherwise stated, the products featured on Maddy Loves were provided by brands or PR for editorial consideration. Maddy Loves is not affiliated with any of the brands, companies or products unless otherwise specified. All of the opinions on Maddy Loves are solely my own and do not reflect the opinions of the brands or companies. Maddy Loves is an unbiased beauty blog and its opinion or conclusion are not influenced by whether the product was purchased or provided as a media sample.

Please make note that any content on this blog is copyrighted to me (unless otherwise stated). Please do not reproduce without permission.